When I was small, our family had a copy of Maurice Sasek’s This Is Edinburgh in circulation:

I don’t remember if there was a specific reason, apart from our vivid consciousness of Scots ancestry, but I read through that book countless times. I bring it up now because I had so internalized the images on those pages that actually going to Edinburgh, all the way to Edinburgh (as Ian Hunter might sing) not stopping at Haymarket, was like entering a a physical representation of my imagination. It was that strange and intoxicating.

Relative to the “Glasgow and Me” theme, nothing I have done since I moved here underscored as much as this that I actually live in Scotland, and that I live in Glasgow-as-distinct-from-Edinburgh. I loved visiting Edinburgh, and I can’t wait to take Margaret and Pippa there. I’ve said before that I feel at home in old places, and Edinburgh is significantly older (in architecture and even in most streets). Add to that the experience of discovering what you had seen and known before (in my imagined, childhood, Sasek-inspired version of Edinburgh) and it was a truly spectacular afternoon.

Now, as to the visit to Edinburgh itself: I arrived at Waverly shortly before midday. I fist explored Princes Street; there’s a branch of the Pen Shop in Jenner’s there, and I went up to encourage the staff by purchasing a bottle of ink remover (didn’t really need any more ink, and I tend to steer away from contemporary pens — speaking of which, I should do some pen posts again soon, maybe after I write out what I was thinking about hermeneutics and moral theology and so on). I had finished reading a book I’m reviewing on the train ride, so I felt a rush of satisfaction and accomplishment; a pen accessory seemed like a modest reward. On the way to Jenner’s, I took a photo of the Scott Memorial. 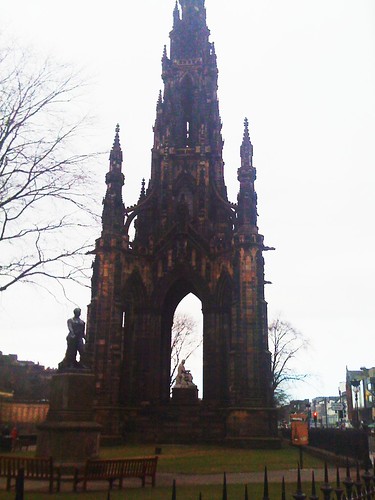 There was a kilted piper busking on the pavement; I declined to photograph him, but I’m sure there was such a figure in the Sasek book, so I felt as though I’d gone through the Wardrobe into fantasy-Edinburgh already (much stronger than seeing locations I recognize in “Taggart” episodes). The message of the Scott Memorial: “We’re serious about honouring people who boost the stature of Scotland!”

I crossed Princes Street Gardens and headed to the Royal Mile in search of the hotel where I’d meet Holly later that afternoon. That accomplished in short order, I began meandering. Sisters and brothers, Edinburgh is a city made for meandering. All the closes — hidden byways and plazas without obvious immediate street access — and bridges and alleys make for prime meanderage. Meandritude. Meanderosity. In one of the staircases, I discovered that some Edinburghians evidently had a low opinion of George II. 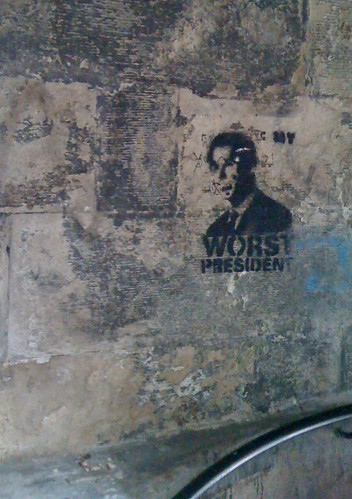 I had coffee at a pleasant juice bar, wandered some more, clambered up to the castle (didn’t go in), 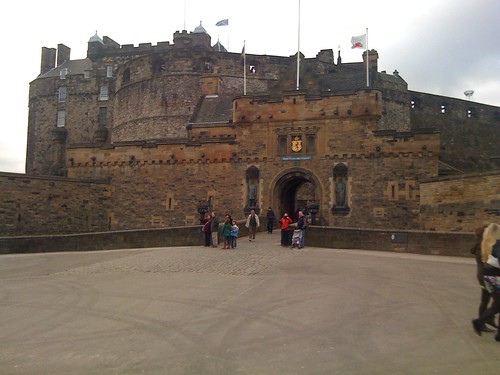 looked in at the Writers Museum, 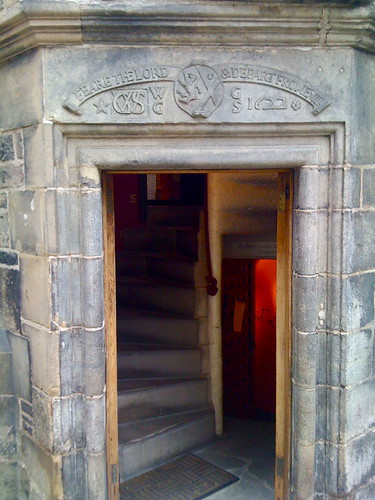 and ended up at one of the cafes in which J. K. Rowling wrote the first Harry Potter book, The Elephant House. There’s a lovely windowed back room there (would be exactly what MArgaret’s looking for, but the commute would be rough), with a great view of the Castle Rock, but I sat out front with a smoothie. 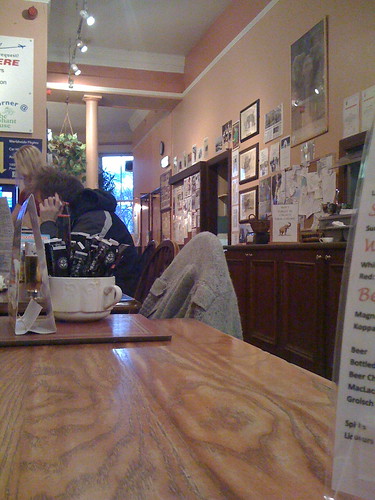 Then it was time to go meet Holly, with whom I shared a wonderful drinks-and-dinner, reminiscing and updating and talking about the cashmere business and academic life. Holly impressed the staff by speaking to them all in fluent Italian; I nodded vaguely, and at one point the “foreign language” center of my brain emitted a pointless “Danke.” We called it a relatively early evening; she had to wake up at six, and I had the train ride ahead of me. The hotel was stylishly crepuscular, so there wasn’t much chance of a well-lit photo, but a kind desk clerk agreed to give it a try. Of course, no single frame caught both of us smiling. . . . 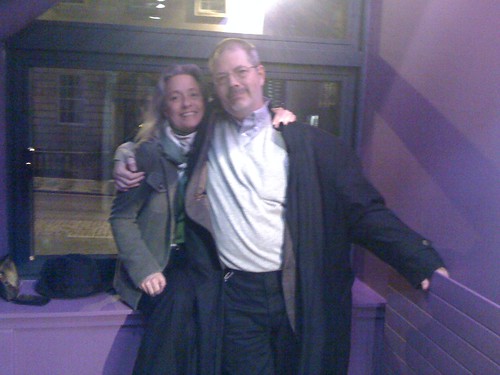