Toward the end of this afternoon’s session on Open Broadband, I got a text message from Margaret. It didn’t say what was up, just told me to call her — which I knew was not a good sign. My father, Donald Geikie Adam, apparently will not come out of the sedation that has been enabling him to tolerate having a breathing tube; sometime tomorrow, the life support machinery will go off, and Dad will die. 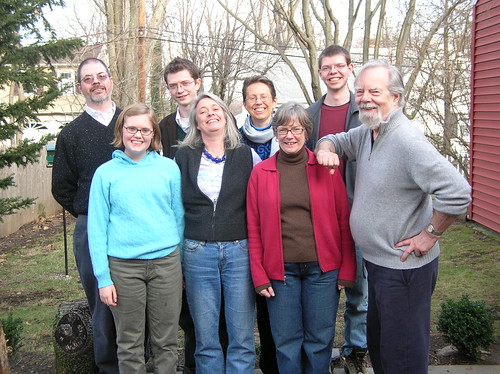 I don’t have garlands of ornate rhetoric to offer in his honor. Give me a few weeks, and I might be able to compose myself and such a tribute. He will not have left a big footprint online; he was an early advocate of digital technology in education (I remember my recoiling in horror when he described the possible benefits of a spelling- and grammar-checker; I sniffed that people should just learn that!), but he didn’t share my involvement with the internet. But look at me: he was the one who lauded the Apple II to me back when I was a mainframe snob, and now I’m going to tech conferences about the Freedom to Connect. He was a lifelong teacher of English literature and composition, and I’m an Anglican priest who teaches interpretation theory and emphasizes writing skills. He taught a comedy seminar for years, and I. . . well, my preaching comes to a great extent out of what I learned from him about stand-up. Four decades of Chatham students learned from him how to write better, how to read with deeper joy and more expansive understanding. When I visited him this summer, he was teaching summer exchange students English as a second language. At Christmas time, he was grilling my kids on what they’ve been learning in their various studies. Once, when he came to visit me in college, my classmate John Cunningham described him to somebody who hadn’t met him before, saying “He looks exactly like AKMA, cut off at the knees” (my sister did call him “Stumpy” sometimes, for his short legs).

Seventy-two is too few years, especially when he gave so many of them to teaching others. I’ve been plying the family trade for almost twenty years myself, and this spring I stand at the edge of turning in my professorial card. I can’t give a good reason, but his dying will make that harder to do. There’s so much left to do.

The Phone Call did not come as a shock; Pa had been in the hospital for ten days or so already. But knowing the odds and hearing the news are two different things. Tomorrow Margaret and Pippa will swing down to Maryland and pick me up to drive me to Pittsburgh, to be with other family members. Between now and then — and for a while after — I have some weeping to do.

Almighty God, look on Donald your servant, lying in great weakness, and comfort him with the promise of life everlasting, given in the resurrection of your Son Jesus Christ our Lord.