By now, most everyone who would make a way to this blog knows that Aaron Swartz appears to have committed suicide Friday. Aaron grew up in suburban Chicago, so our circles overlapped both online and spatially; as far as I can recall, we were only in the same place at the same time once. In 2003, Josiah and I went to the opening of the Michigan Avenue Apple Store in Chicago, and while we were there I recognised Aaron. Apparently — though I didn’t remember this — Si went over and introduced himself, and I took a picture of Aaron browsing at a PowerBook. Apart from that, and knowing some of his friends, that’s all that connected us; Aaron didn’t know I existed. 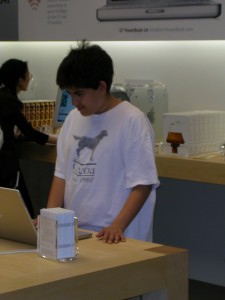 When I woke up and began browsing yesterday morning, the news had just broken. The only media source that mentioned it was the MIT newspaper; as my tech friends woke up one by one, Twitter trembled with their shock and grief. Most knew that depression numbered among Aaron’s complexities; some remembered him blogging thoughts about suicide. No one saw it coming.

In the hours since we woke up to this intensely sad news, people have twittered and blogged and Facebooked in every way one would predict: unanimous grief and shock, lots of memories, many monitory reminders to keep in touch with the people you love, some self-blaming, some instructional columns about ‘signs’ or ‘what to do’ or ‘what not to do’, some angry criticism of how other people try to deal with the finality of a friend’s death. I don’t have the slightest idea how much the vastly overwrought federal criminal charges that Aaron faced affected him, but they certainly make a plausible hypothetical trigger on the second anniversary of his dramatic arrest. Some have begun a drive to expel the prosecutor from her office; Larry Lessig sees a direct connection between her miserably poor prosecutorial judgment and Aaron’s suicide, and since Larry knew both Aaron and the details of the case better than almost anyone, his word carries a lot of weight with me.

I don’t favour demanding that the prosecutor be expelled from office. Bad as her sense of this case was, she too has a life and family and friends, and we can’t know the extent to which her zeal contributed to Aaron’s death. (I do think it would be a mistake to re-appoint her, still worse to promote her — the public facts of the case show a dangerous lack of perspective, which could well lead to further misjudged prosecutions.) Better she not be given a cause to blame others, to turn away from soul-searching to bitter resentment; better that this be a sign of her competence than a moment for vengeance.

Suicide defies our capacity to reason about it (a bitter irony, given Aaron’s own brilliantly logical thought). We want to know so much more about it than we possibly can; the people we most need to learn from will never speak to us again. We can draw conclusions from the situations of people whose suicides left them yet alive, but that’s still a different thing than knowing what we need to from people who made sure their suicides were effective. Suicide – and its malign companion depression — affect us in ways greater, stronger than we can make sense of. When ancients talked about people being possessed by powerful alien spirits, they correctly described the force of these powers on mere human capacities (if not correctly identifying the ontogeny of the force). If we eventually learn something about suicide and how we may protect ourselves and our friends and loved ones from it, we will probably learn something that will catch all our grief-stricken pronouncements off target. For now, we struggle against something we can’t know enough about, and each of us will respond to our relative impotence by pulling counsel out our own repertoire of (falling-short) best ideas. And — for now — we’ll continue to lose our hold of some of the people who matter most to us. That saddens me.