The news has recently called our attention to special events at cathedrals, a session of ‘crazy golf’ in Rochester, and a Helter Skelter in Norwich. These extraordinary installations have been planned to get people into cathedrals, on the premise that someone who has never set foot in a cathedral before (or never in that particular cathedral) would be more likely to come in for a second time (say, for Sunday Mass) if they had been once to get in a quick eighteen holes of crazy golf.

Now, Margaret and I are far from antithetical to crazy golf. Viz. — 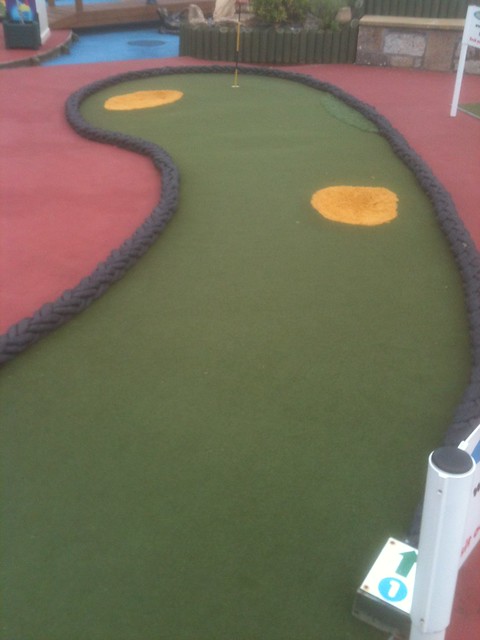 (We played this course in Ayr, where Margaret triumphed gloriously over her determined spouse.) We love the absurd activity and the mild competition. We also love cathedrals. (Not so keen on helter skelters, but….)

But all this provokes a fair question about whether the characteristics of this sort of summer recreation reasonably converge with the point of cathedrals. There’s an inaccurate but often overcooked claim that cathedral naves were normally used as large open indoor spaces for all sorts of secular purposes, so that having a golf course in your nave is just harking back to ancient practice, from before a time when people got overly fastidious about the sanctity of church spaces. Add to that the apparent urgency of getting people into cathedrals (for any purpose whatever), and the case seems to be strong indeed.

I’m not convinced that they do so converge, and I haven’t seen any evidence that people who like funfair rides then take up church attendance, or even cultivate a more favourable attitude toward the church. Someone who’s been deeply disturbed by sexual abuse scandals, for instance, may not be mollified by crazy golf. There are lots of plausible reasons for not going to church, and I haven’t quite seen round the way that casual recreation might counteract any of them. Let’s allow, though, that by disarming the suspicion that church people are too stuffy and no fun does some good for the church’s standing in the community.

We may also allow, though, that some of the purposes of the cathedral aren’t immediately compatible with secular frivolities. You may have noticed that there’s a lot of palaver these days about ‘sacred space’, about ‘thin places’ where everyday concerns melt away and the presence of deeper presences allegedly take on greater prominence; it would seem odd to suggest that crazy golf makes a cathedral seem more ‘sacred’ or ‘thin’. The function of a cathedral isn’t entertainment, either; even on a charitably expansive account (say, ‘helping people shed their worries and experience the relief and joy that come from reconciliation with God’), playing crazy golf or riding down a helter skelter doesn’t seem predictably to correlate with ‘experiencing something akin to holy joy’. Sometimes I find crazy golf very frustrating indeed, and I’m uncomfortable with the prospect of riding a helter skelter (though I can’t say I’ve tried, within a cathedral or without).

John Henry Newman, as an Anglican travelling around Europe, observed of the superstitions and political scheming and (especially) the questionable means deployed to draw people into the Roman Catholic Church, ‘Who can but feel shame when the religion of Ximenes, Borromeo, and Pascal is so overlaid?’ Is it fair to ask, ‘Who can fail to feel shame when the religion of Hooker, Donne, and Pusey is so overlaid?’ (Or fill in with the names of your favourite profound Anglicans.)

On one hand, obviously, one may justly so ask. Try to imagine Cranmer or Andrewes or Wilberforce preaching from a roller-coaster, or in the midst of an Aunt Sally contest. (Indeed, ‘sanctity’ was the characteristic Newman held up as the English Church’s bulwark against Romanism.) General solemnity and sanctity ordinarily attend — if they do not necessarily define — Christian worship.

On the other hand: Newman eventually crossed over to join the Roman Catholic Church, however much he may have deplored the mummery and politics he perceived in it. And the cathedrals of England have been restored to normal functioning by now, so [probably] no [lasting] harm done.

Still, it would be heartening to see more completely into reasoning that supports the connection between extravaganzas and the gospel so forcefully proclaimed by the saints, at the cost of their lives. ‘When Christ calls a man, he bids him come and… putt’? Bonhoeffer didn’t think so.