Morning continues less chilly, 6° with no noticeable wind. My legs were reluctant — again, the lifty-uppy bits that connect the thigh to the torso voted firmly against anything but the most cursory run — though the mile went by without stress. 10:15.

Breakfast, followed by morning prayer and blogging about the church and the pandemic, and working on an Easter sermon for a friend’s congregation — and not-going to a staff meeting. I read some Newman and leet my mind wander toward midday, and in the afternoon Margaret and I made a foray in Aston’s Eyot and the Kidneys, where we encountered three-quarters of the population of Oxford, especially the parents with children (children who moved alternately at a decrepit snail’s pace or in furiously rapid unpredictable zigzags, so that in either case it was impossible to get past them in an appropriately socially distant manner. 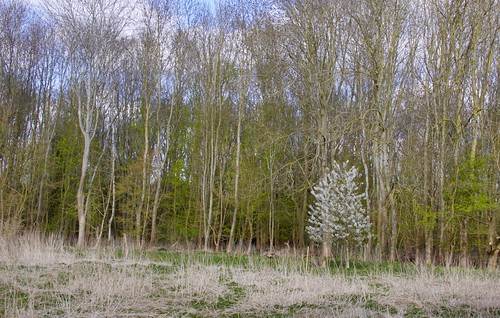 Oxford, its children, and one lonely muntjac who was just trying to keep out of sight till one of the youth, a budding naturalist, spotted it and shouted ‘Daddy! I told you we would see one!’ I am not at all put out that I had quietly and inconspicuously lined up a photo for where the muntjac would have been about one-half second after the cri de triomphe. I have seen and photographed muntjacs before and, God and coronavirus permitting, I will see them again.

Dinner delivered from Majliss, and one episode from Spooks in our evening. Our daughter-in-law called, with grandson, and we visited Thomas for a while. Our son has developed symptoms of COVID-19, so now our immediate family has been touched.