A longish time ago, my Mom gave me a fountain pen that had been knocking around her family for years. It was a handsome deep salmon colour; I think I used it a couple of times, then set it aside. The next time it occurred to me to use it, nothing seemed to work and I heard a rattling sound inside the pen. So much for that plan! I kept the pen, though, for the sake of continuity with Mom, and one day in Durham I learned that there was a guy who repairs pens, who lived right in town with me (and in fact, who worked at Duke near me). I arranged to meet Ross and to hand over the pen to him for repair.

(tooth marks courtesy of one or another family dog, I believe)

Ross explained this Esterbrook (identification was a no-brainer, since it says ‘Esterbrook’ on the clip and the barrel imprint) was a ‘third-tier’ pen, but that it stood out for having handsome plastics, a simple, easy to maintain lever-filling system, and excellent nibs. Indeed, Esterbrook nibs are readily interchangeable, and could be obtained in a variety of styles. Esties are hard-working, durable, good-looking, excellent writers, and are still relatively easy to track down in the USA (much less so in Britain; I haven’t seen any bargain Esterbrooks, and only even seen a few that passed through Peter Crook’s hands, via South Africa). These are perfect pens for beginners to collect and repair, and so I (as a beginner) did just that.


When I set up the camera to shoot my Esties yesterday, I realised again that the pens will look less attractive than they would after a thorough ultrasonic cleaning. If I were a dealer, I’d track down such a cleaner, but that would be a luxury item for me as a casual user; for the time being, I just polish and buff them by hand. A number of these pens (I noticed) still want repair, which I’ll look into sometime. Without a hair dryer to warm the section slightly, though, it can be hard to open the pen for servicing the sac and J-bar.

The standard-issue item in the Esterbrook family is the ‘J’ pen with jewel (not really jewel jewels, but any cap-like decoration) on both ends — hence a double-jewel Esterbrook J. Esties come in six basic colours — Dubonnet Red, Black, Cobalt Blue, Green, Copper, and Grey — with some variations on the specific chades of the colours, depending on the batch of plastic. (Here I’m relying on Richard Binder’s research on colour names.) Here are my double-jewel Esterbrook Js: 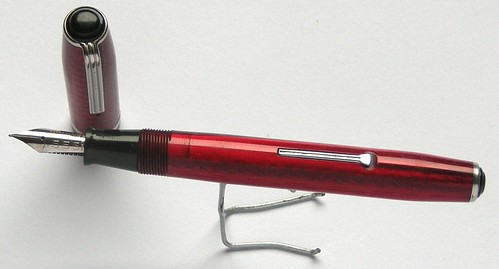 (the one from Mom) 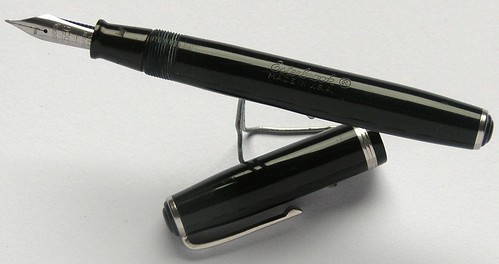 (See that this pen has been heated and stretched, presumably by someone trying to repair it clumsily. That’s why I’m not fixing any of the pens at hand without a good, gentle heater.)

You can see that although the basic design in the same for each, they vary in small particulars. The fill lever sometimes has a rounded end, sometimes a spade-shaped end. Sometime the clip has ‘Esterbrook’ imprinted on it, sometimes not. The barrel imprint may vary. The coloration of the plastics vary. If I were a serious Esterbrook collector, I’d try to track down as many of these variations as I could, but I’m not that hard-core.

Before the J, Esterbrook made the Dollar Pen — same colours, but with a different clip design and the jewel on the cap is continuous with the clip, and engraved with ‘Esterbrook’:

(No section/nib on this one)

Between the Dollar Pen and the double-jeweled J, Esterbrook tried out several designs; this is a single-jeweled Transitional J, with the distinctive three-fin jewel on top (no jewel at the bottom):

After the J, Esterbrook introduced two variations on the theme: the LJ, which was about as long as the J but more slender, and the SJ, which was both more slender and shorter (nothing to do with the Jesuits). I have a couple of LJs and several SJs:

(There are a lot of black SJs out there with custom imprints — many Bell telephone Esties, and this one’s from the Fort Wayne School System)

And there was a vogue for making special pens for women — this was the Esterbrook contribution to that species, the CH ‘Purse Pen’ in pastel colours, even shorter than the SJ:

(This pink Purse Pen was horribly abused by a previous owner; I’ve cleaned it up considerably, but not completely, alas, since I took this photo a few years ago)

And finally, the royalty of my Esterbrook assembly, the LJ ‘icicle’ pens, so called for their characteristic vertical stripes:

So that’s the Esterbrook wing of my pen museum, the oldest specific collection among my pens (I’ve had other fountain pen types from longer ago, but this is the oldest set I deliberately gathered).