I know that some of you who read this blog can’t quite imagine spending three weeks cooped up in a bus coach with a male choir of forty ranging in age from ten to about sixty (that’s a guess). I myself would have had a hard time imagining what it would be like, and some of what boggles my imagination won’t be published here for all the world to read — but it was interesting in the fullest sense of the word.

So, I left off a week ago. (Is that really possible? Only a week ago I was in London, getting ready to meet Gary and Fiona and Cameron? Wow!) We were supposed to meet up with Gary at 12:30 in the Crypt of St. Paul’s (a cheery place, with lots of memorials I was too scrupulously conscientious to photograph, including Sir Arthur Sullivan, Florence Nightingale, Henry Moore, and of course Christopher Wren, along with Lord Nelson, the Duke of Wellington, and so many other military heroes that one of our friends referred to it as “St. Paul’s Cathedral and Armed Services Memorial” — if you click on the “About St. Paul’s” menu, you can see a layout of the Crypt that will show relevant memorials, and if you click on “cathedral floor” you can see QuickTimeVR panoramas of the cathedral, including the Quire, where the choir sang, and the centre of the cathedral, through which our procession entered the Quire). But traffic was bad, and the Turners were running late; we knew, because Gary kept calling to update us on where they were (“It’s ten after twelve, and we’ll be a little late”; “We’re about ten minutes away”; (ten minutes later) “We’re about five minutes away”), and finally we agreed to meet out in front of St. Paul’s. We didn’t care — we had to see Cameron, and if that meant waiting around for Gary and Fiona, well, that’s just the cost of the excitement.

So we ended up playing a game of “Where’s Gary?”

Were they Gary and Fiona? 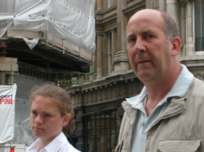 Or the occupants of this snazzy car?

I don’t think they’re the Turners. 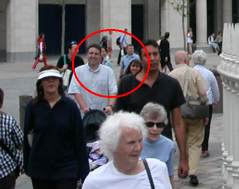 We wandered up and down Ludgate Hill looking for just the right place to eat lunch, and talking about Cameron (other topics emerged, but none so important). We knew Gary would be a delight, and we estimated that Fiona would be as congenial as she is beautiful (she turned out to be more so), but we longed to get to know Cameron better, and we must report that she was both lovely and fascinating. She evinced a strong interest in digital ID, for instance. 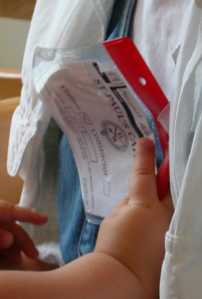 The time passed all too quickly. Gary was as funny and clever as you’d expect (and you have high expectations, I know); I like his use of “organic” as the characterization of what others sometimes refer to as “meatspace” or “real life” (although it does work as well for saying things like, “QuickTime VR is cool, but you have to see St. Paul’s organically”). Fiona was just spectacularly sweet and bright and breathtakingly lovely; Cameron had the exemplary good taste to bond quickly with Margaret, who has a very soft spot for infants. It was all we could do to resist the temptation to hop into the car with them as they pulled away from their parking space in Smithfield Market. 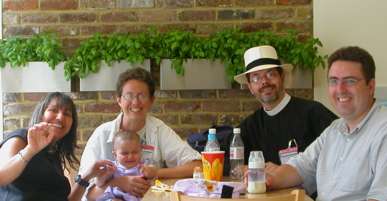 Gary’s picture is better, I think (would you send me a full-size version, please, Gary?), but this was the photo of ours that I liked most.

Organic interaction enriches tremendously the pleasure of knowing people online, but it’s not fundamentally different. I miss Gary, but not as much as I miss Fiona and Cameron ’cos I can read Gary’s blog. ’Twould be great if we were closer neighbors, though, and not only because we might get to babysit sometimes. . . .

Now, back to choir events. The Saturday Evensong went exceptionally well; it would have been exciting to sing the Sunday mass, that wasn’t on our agenda. By the way, leading worship always evokes an indescribable awe, but doing so in the ancient, historic cathedrals of Rochester, Oxford, and especially St. Paul’s raises that feeling to an entirely different order. I will not soon forget the experience of hearing the choir’s harmonies reverberate for eight or nine seconds (down from the canonical eleven seconds because of the shroud of scaffolding surrounding parts of the nave), or of reading the lessons from in front of the high altar. Entirely humbling and amazing.

Sunday morning we got up early and boarded the coach in time to get to the Sunday mass at Canterbury Cathedral (our fourth cathedral in two weeks). I had an entirely incorrect notion of what it would look like; it was manifestly ancient and lovely, but it simply wasn’t the cathedral I had imagined. During the service, some seminarians studying in Canterbury for the summer stood up to sing, and to our surprise, one of the group was Seabury’s own Gwynne Wright. We visited the shrine of Thomas à Becket — simple and, again, overwhelming — then set out for Dover, where we embarked for the ferry ride across the Channel to France. (By the way, I want to put in a plug here for the intensely entertaining journal of Mike and Tex’s winter trip to Paris from 2000. It’s not strictly relevant to our tour, but it’s funny and reflects many experiences that St. Luke’s choir members may also have encountered. One of the martyrs in his pictures from the Louvre, of whose identity Mike wasn’t sure, are the same Peter Martyr whose image graces the Jerusalem chamber at St. Luke’s.)

John the Coach Driver made good time getting us to Saint-Denis, but unfortunately wasn’t clear on where in Saint-Denis our hotel could be found, so we spent a good while reconnoitering this suburb of Paris before we made our way to our lodgings. The hotel was right around the corner from the basilica, but our schedule wouldn’t allow for us to explore the lovely church until late afternoon, Tuesday. We were on a narrow street winding through the apartment complexes that housed many commuters; the bus coach could fit through the streets, but it was another of John’s impressive feats of driverosity that he got us where we needed to go without knocking over any signs, bollards, trees, or pedestrians.

Sometime during our stay in Oxford, where the staff at Lady Margaret Hall kindly provided us with cute little miniature toiletries kits, someone (whose name might sound like “Budzynski”) started a fad of seeking out shower caps and wearing them on the coach, identifying them by their French designation “bonnets de douche.” At varying points, tour participants adopted hair nets, rain bonnets, and several varieties of the genuine bonnet de douche. At the end of Monday’s travels, John gave Mr. Budzynski the ultimate refinement — the beret de douche — in a touching ceremony recorded on my photos page.

Monday went well; John gave us a ground tour of Paris (carefully avoiding making any commentary on what we saw, lest he transgress the law forbidding non-French guides using onboard intercoms for guided tours of the city), then we splintered into smaller touring groups to explore on our own. Margaret and I covered the exterior of the Louvre (we decided that rather than short-change that museum and miss everything else about Paris, we wouldn’t look in), thence to Notre Dame. After we explored Notre Dame, we stopped for lunch at a cafe on the Boulevard St. Germain which, as we discovered with some vexation, offered free wifi (“Bandwidth, bandwidth everywhere/and not a laptop to connect with”). Vegetarianism not being a prevalent way of life in France, so far as we can tell, Margaret and I had omelettes for lunch, then set out to see the Pantheon and make our way back to then Eiffel Tower, near where we’d meet the rest of the tour again to take a ride on one of the bateaux-mouches that ply the Seine.

Just after we docked, we rushed to the American Cathedral in Paris for rehearsal and Evensong. Margaret and I visited with our friend & Seabury alumna Sharon Gracen about her work as Canon Pastor at the cathedral, then slipped into the cathedral for the service. The choir was a little worn out by this time in the tour, but Evensong ended the worship schedule of the tour triumphantly. We returned to the hotel for dinner and collapsed into bed.

Tuesday — just five days ago as I write — we clambered aboard the coach to drive past Versailles (“don’t look too closely, we only have five minutes!”) on our way to Chartres, where we explored the amazing cathedral, had lunch, and played by the riverside (successfully losing one of the tour frisbees in the Eure), and returned to Saint-Denis, where we had the chance to look in at the basilica (unfortunately, the necropolis had closed by the time we got there). This was in many ways my favorite of the French churches we visited; it was airier than either Notre Dame de Paris or Chartres, and the necropolis — what we could see of it — was staggering (more than seventy-one French monarchs have been interred at Saint-Denis!).

We concluded the tour with a sumptuous dinner, a farewell ceremony, and on Wednesday flew back. No teenagers were lost, left behind on purpose, locked in the baggage portion of the coach, nor were any of the adults. Margaret’s already working on next year’s tour with the girl’ choir and Schola.

Photos of the last few days’ events here, and a collection of photos-of-participants here.