Pippa has been permitting her gifts for painting and drawing a lengthy fallow period — and as we try not to strong-arm our children’s learning, we haven’t pushed her back to her easel. She was given several art-oriented presents for her birthday at the end of November, though, and in early December she set about executing a Christmas present for aunts Jeanne and Gail (whom she’ll make a three-week visit later in the winter).

We took the pastel in for matting and framing (a customer at the table next to us ooh-ed and aah-ed about the image, which discomfited Pippa), but it took longer to frame than could be squeezed in before Christmas. We picked it up during the week after Christmas, and after the holiday’s assembled family multitudes shuffled back to their various academic institutions, I packed and shipped the framed pastel to Maine.

Today, it arrived in Maine, and Jeanne and Gail have had the chance to admire it, and now I have permission to post it to my Flickr page — so those of you who’ve been missing the steady flow of Pippa art can take some solace in this shipment. 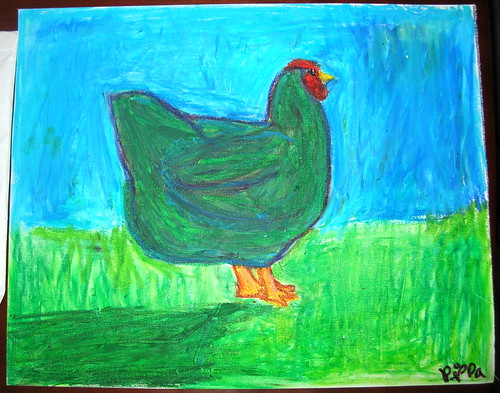