First of all, I should say belatedly that stromateis transliterates a Greek word that serves as the equivalent for the Latin miscellanea. It’s the neuter plural form of the noun strômateus, “bedspread,” which in the plural form has the sense of “patchwork” (hence, an assortment of various matters, a thing of shreds and patches). Titling a blog entry “Stromateis” is a way of saying “even more random than usual.”

OK, the particular miscellaneous topics for this Sunday include:

• Someone finally said out loud how ludicrous the whole bathrobed-terrorist security breakthrough is. Unfortunately, people will no doubt ignore this (“consider the source,” the World Socialist Web Site).

• Last Saturday at Ravinia, Garrison Keillor read aloud our greeting to Jeannette DeFriest, priest-in-charge of our parish home, St. Luke’s church. Sad to say, he neglected our greetings to other friends and family. 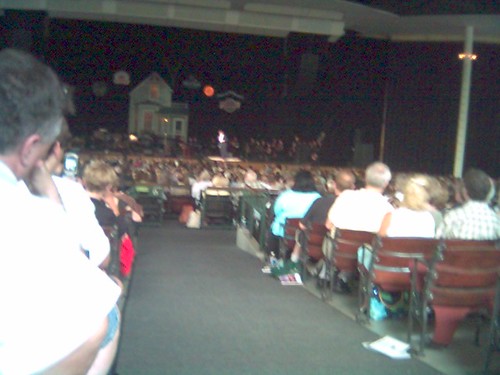 • I uploaded that image from the camera phone that Si traded me (since he never uses it). I have to email the image to my Flickr site without having seen it first. I could obtain a cable to connect my phone to my computer, but the phone service store wants an extortionate $60 for the cable (so that I remain captive to their upload-via-phone connection). Anyone know of a simpler solution, so that I could (for instance) find out ahead of time that the picture I took was blurry, or spruce it up a bit, before I draw it from Flickr?

• Pippa and I rode about five miles on our bicycles yesterday. Mine has one of those old-school hard leather seats — so when I got back, through today, I have felt as though I dropped from a height of forty feet , straddling a telephone pole.

• In church today, one of the torch bearers fainted while I was reading the gospel. As he crumpled to the floor, a parishioner and I caught him, the M.C. and I caught his candle, and several people went to get water and ease him back to consciousness. Imagine a bow-legged priest (see above) holding a processional candle in his left hand, an acolyte in his right arm, ascertaining that said youth was not about to throw up, and signalling the congregation not to be concerned. Everything turned out fine.

• I think there were a few more things, which I’ll add as I think of them.