Michael has posted an exquisite series of photos at his Flickr area, celebrating Lily’s first Communion – she’s growing so fast! It seems like ages since we saw her. 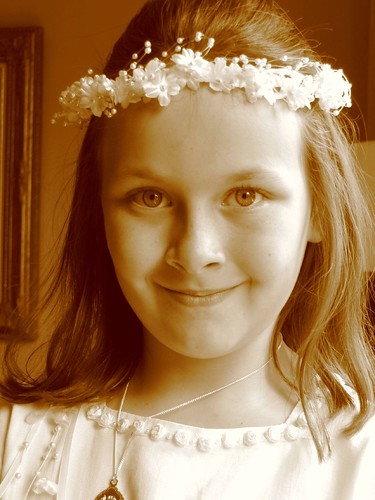 Yesterday we sang a hymn by Michael Hewlett that describes the Holy Spirit’s action apart from the people of Israel and the church:

which struck me as an impressively nuanced way of making the theological point that divine truth can be known (albeit perhaps obscurely) apart from committed faith – especially impressive since Hewlett managed to say it in rhymed lyric.

That, in turn, reminded me of my favorite little-known Isaac Watts hymn verse, a Lesser Meter doxology:

Glory to God the Trinity
Whose name has mysteries unknown;
In essence One, in person Three;
A social nature, yet alone

Next time I’m in charge of a liturgy, I’ll try to work that one in.