A year ago today, I was interviewing for a job on Pluto. At least, that’s what I let out on Facebook (the “Pluto” part was an inspired idea of Pippa’s); terrestrial observers might have seen me wandering in a spaced-out, jet-lagged, delighted, anxious sort of way through the streets of Glasgow’s West End. I explored Professors’s Square, especially Number 4, and meandered up and down Byres Road. I marvelled at the sunny weather — not at all what I’d been told to expect in Glasgow — and the long, long summer days. (I did not take time to think about what that implied for winter days.) 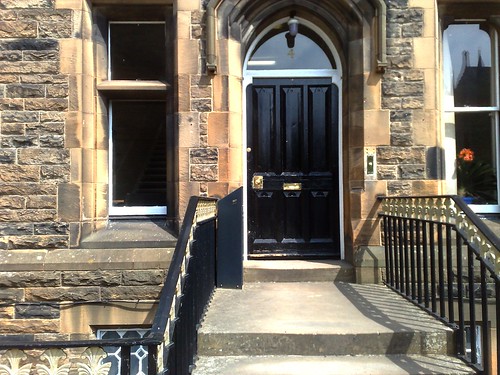 After I gave my presentation to the department, and then had my interview with the search committee, I made my way back to the B&B at which I was staying and stretched out for a nap. Late in the afternoon, I got a phone call saying that the committee would ask that I be appointed to the opening. I was dazed; I was joyous; I was exhausted. I went over to Yvonne Sherwood’s flat (just around the corner, as it turns out, from where I would live), and she and a couple of my new colleagues welcomed me and celebrated with me.

It’s been a hard year, living apart from Margaret yet again. It’s been a very full year, stumbling through my introduction to an educational system so similar to the US on the surface, and so very different from the US in all the details. It’s working out well here, though, and I’m beginning to feel at home in the Subject Area, and I’m looking forward to getting acquainted with my new colleagues in the School of Critical Studies. I joined the union as soon as I got here, and this spring we’ve authorised a strike to protest compulsory redundancies in three areas of the University — and yesterday the University Court decided that they would not impose any redundancies. And both England and the US won their World Cup games.

Margaret and I are heartsick about the complications that have delayed her joining me here; she asked me for photos of our walking path to and from the Subject Area offices, so I took a small mountain of pictures to illustrate the Flat-to-Square axis (start here and browse toward the right for the trip to the office, and start here and browse toward the right for the trip home. Paths are not direct; I make a couple of side trips to incorporate sites Margaret would recognise. And there are some campus- and union-related photos in the middle). We wish Glasgow were closer to where our fantastic children will be living, and there are some other hardships about this relocation. But this has been a very wonderful year, in which neighbours in the University and St Mary’s University (and at other universities and the Scottish Episcopal Church) have reached out and embraced me in a quite unexpected way. It’s all a tremendous blessing, and I’m intensely thankful (and just imagine how thankful I’ll be once I’m reunited with my beloved).