The past week went by quite rapidly — I’m not entirely sure why. I’m working through the (relatively short) James manuscript, developing a couple of points beyond what I had originally written, accepting the editor’s edits, and on just one point so far pushing back a bit. I had a let-down toward the middle of the week, as our administration seems to be dragging its feet about replacing the two professors in Theology/Religious Studies who have accepted positions elsewhere (this is part of the *#$€!¥!#* REF process; other institutions are recruiting some of our best staff to strengthen their REF profiles, while we aren’t filling those positions even at the entry level; draw your own conclusions about the consequences of this policy for our REF results).

Ah, well, nothing I can do about that. Yesterday morning, I gathered my wits, or ‘wit’, or half thereof, and trundled down to the Main Gate of the University, to hop in a cab that had been sent there by BBC Scotland. Someone at the BBC had got wind of my work on technology, and I’d had two long phone calls with the assistant producer and the producer, and yesterday I went in to the studio to record some of what I’d been saying. I ended up talking (at the producer’s prompts) nigh on to two hours, for what will turn out to be about five minutes of air time. I tend to trust the producer, so I’m looking at this as a way of improving the odds that I actually said something interesting and sensible (though one could also interpret this as ‘it took two hours till AKMA had finally uttered five minutes of minimally useful material’). 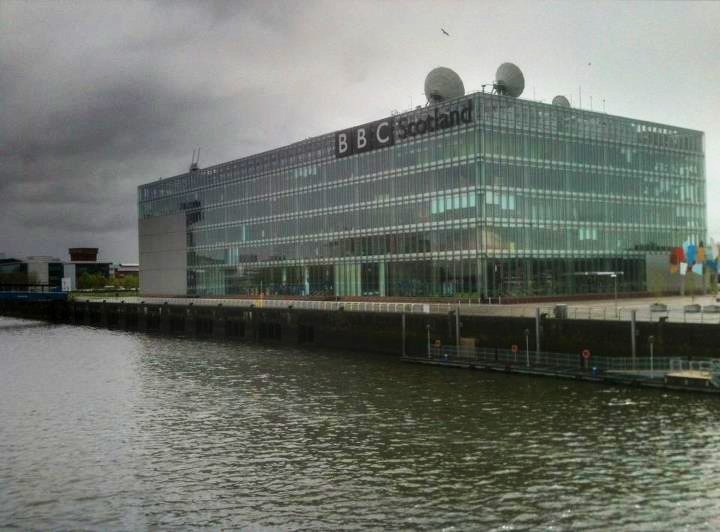 The programme will air on 21 May as part of the Digital Human series; we’ll be in the States, on our way to Pippa’s graduation (Yay, Pippa!), but you can download episodes (for a limited time only!) from the series from the BBC or from iTunes. I hadn’t listened to any of the preceding episodes before the taping, which is just as well because I would have been tempted to argue with people in the preceding episodes. I didn’t talk with the presenter (didn’t even know about her — I only dealt with the producer), so I wonder how the bits of what I said will be put together to fit with the presenter’s narration (and who the other voices will be).

The highlight of the entire experience for me, even more than having a great time talking with the producer, who’s a very pleasant gent, was ascending to the fifth-floor canteen for a cup of coffee with the Clash’s ‘Career Opportunities’ running through my head (‘Do you want to make tea / At the BBC?’). Actually, that and swapping song lyric quotations with Peter, the producer, who in his turn cited Elvis Costello’s ‘God’s Comic’ (‘they say that travel broadens the mind / till you can’t get your head outdoors’, with regard to the expansiveness of the Web).