This morning during my Saturday meander through the lanes of Oxford, I wound up pausing for a cup of coffee at the Golden Cross cafe (no website of their own, oddly). Margaret and I have been there before — only once, I think — during a December gift shopping expedition. Margaret needed a brea and a cup of tea, so I sallied forth from there to various merchants, gradually accumulating a small mountain of bags and packages that threatened to take over one of the sitting-rooms over which the cafe presides (the duvet and pillows were the prime culprit in this inadvertent coup attempt). We had begun to attract some mildly hostile attention by this time, so we’ve avoided the place thereafter.

Today I was looking for a non-chain cup of coffee in the Cornmarket area, though, and I thought to revisit the Golden Cross without armloads of packages. I also opted to sit in a different part of the cafe, so as not to trigger any associations among the staff. As I selected a table in the counter area, I observed some painted/markered inscriptions that I hadn’t noticed the time I was trying to avoid stepping on people’s toes or knocking their teapots over with the bulging bag of duvet.

[Let’s not fuss over the incorrect apostrophe, and instead relish the slightly warped wit]

Over the counter, they had posted two of these side-by-side:

And my table was adjacent to this instruction: 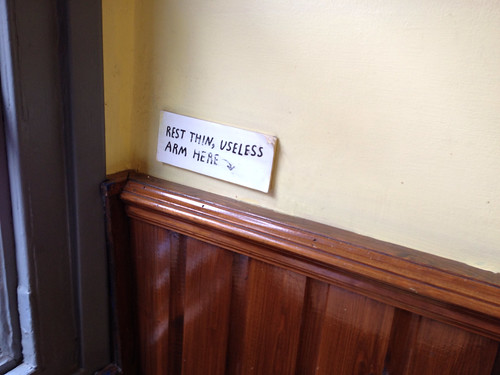 The coffee was satisfactory, no one gave me a retrospective fish-eye (in fact, the staff were very agreeable and welcoming), and I approve of their sense of humour (the style and lettering quite reminiscent of Dave Walker’s work, to my eye). I expect to go back.