So this is the story: St Stephen’s House had been planning, for months, to enact an open-air Passion Play in our East Oxford neighbourhood. We’d been planning, rehearsing, arranging, for months (led by my dear friend and colleague Fr Damian, and our student Alice). Everything seemed to be set — as I understand it, everything had been handled just as it was last time, only even more carefully — but the Oxford Council seemed to need one more for filled out, which form it was in fact too late to submit by the time we were asked for it.

As a result, the Passion Play was cancelled, and we thought that was the end of it (as far as I know, everyone at SSH was keeping quiet about it). Until we saw the cover of this morning’s Oxford Mail: 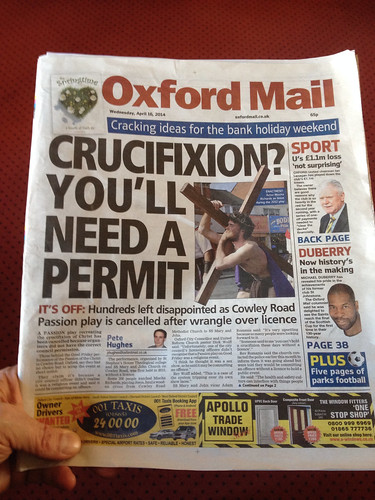 Now there are stories in that paragon of journalistic reserve the Daily Mail, BBC Oxford’s Twitter account (the BBC itself hasn’t picked it up as yet), and who knows what will be follow.

As my former co-worker Bernard observed, “So with the right permits in place crucifixion is OK? I would like to see those forms please. Or is this an English thing?”