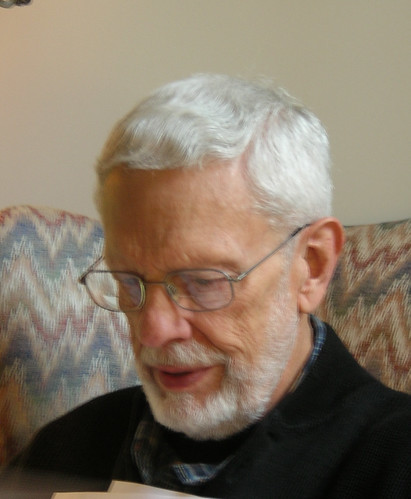 Born in Lynn, Massachusetts, January 7, 1930, the son of Captain Charles N. Bamforth and Dorothy Anderson Allan, Dick Bamforth grew up in Swampscott where he completed high school in 1947. He majored in French and Classics at Bowdoin College and graduated in 1951. After further study at Middlebury College he taught French, Latin, and Social Studies at Cony High School for one year before enlisting in the U. S. Army during the Korean War. In the Army Security Agency he studied the Russian language in Monterey, California and spent the rest of his tour of duty in communications reconnaissance on the border between the American and Soviet Zones of divided Germany.
Inspired by a German Lutheran pastor who reached out to American GIs, Bamforth shifted his direction and, upon release from the Army, entered Berkeley Divinity School at Yale. He graduated with the degree of Master of Divinity in 1958 and was ordained to the priesthood in the Episcopal Church. He served in two Missouri parishes: Grace Church, Kirkwood, and Holy Cross Church, Poplar Bluff. In 1959, he married Patricia Anne Pennington of Kirkwood. Their two daughters were born in Poplar Bluff.
In 1966 Bamforth was called as Rector of St. Mary’s Church, Rockport, Massachusetts where he served until 1992. Forever a student of language and literature, he took many evening courses at Harvard and, in 1982, earned an additional master’s degree from Boston University in the Teaching of English to Speakers of Other Languages. While ministering in Rockport, he tutored numerous refugees and foreign students in English and taught courses in Russian language and culture in the continuing education program of North Shore Community College.
Bamforth retired from full-time parish ministry in 1992 and moved with his wife, Pat, to Augusta. For nine years he was a regular substitute teacher at Cony High School, served as Interim Rector of St. Mark’s Church, Augusta, from 1993 to 1994, and was for 20 years a frequent supply priest in many Maine parishes. More recently he served as Assisting Priest at St. Mark’s. His book reviews and articles have appeared in several church periodicals and, with his brother, he co-edited the autobiographical journals of their sea-going father, Iron Jaw, A Skipper Tells His Story, published in 2002.

An avid gardener and photographer, Bamforth enjoyed his kayak and canoe at “Someplace Else,” his summer camp on Damariscotta Lake. Dick and Pat enjoyed traveling in Great Britain, where he sought out English and Scottish relatives, and in Russia, where he twice visited seminaries of the Orthodox Church. A spiritual director and small group Bible Study leader, he also did tutoring in the Russian language. In recent years, he taught a variety of courses in the UMA Senior College, focusing on literature, art, history, and religion.
In Maine, he served on several diocesan committees and was a member of both Veterans for Peace and the Episcopal Peace Fellowship.
Bamforth delighted in the nicknames others gave him. His grandchildren call him “Pa Moose,” high schoolers called him “Abe Lincoln” or “Colonel Sanders,” and parishioners often called him “Father Bam-Bam.” In addition to the Bible and the Book of Common Prayer he considered both Celtic and Russian Orthodox spirituality, together with the classical Anglican theologians, to be great resources for his faith and life.
Bamforth is survived by his wife, Patricia of Augusta; daughter Jeanne Bamforth of Topsham; daughter Margaret and her husband Andrew K. M. Adam of Oxford, England; three grandchildren: Nathaniel Adam and his wife Laura of New Haven, CT, Josiah Harris-Adam and his wife Laura of Watertown, MA, and Philippa Adam of Bristol, ME; sister-in-law Janice Bamforth of Belmont, VT; niece Judith Jervis of Danville, N.H.; and nephew Charles H. Bamforth of Kingston, N.H.
A memorial Eucharist was celebrated at St. Mark’s Episcopal Church, 9 Summer Street, Augusta on Saturday, Jan. 14, at 1:30pm, followed by a public reception. Interment of ashes will follow at a later date in Forest Grove Cemetery.
In lieu of flowers, memorial contributions are invited for St. Mark’s Episcopal Church, 209 Eastern Ave., Augusta, ME 04330.
Arrangements are by Plummer Funeral Home, Augusta.