A) I’ve posted some images relative to my close encounter with a e-felony rap at flickr, of which I’ll link to a couple from here.

B) I’m in Nantucket, Massachusetts, not at my home in Illinois — and I don’t know whether Mass has different state law from Illinois (that’s one reason I asked). However you slice it, my police informant (so to speak) emphasized that this is a federal offense. 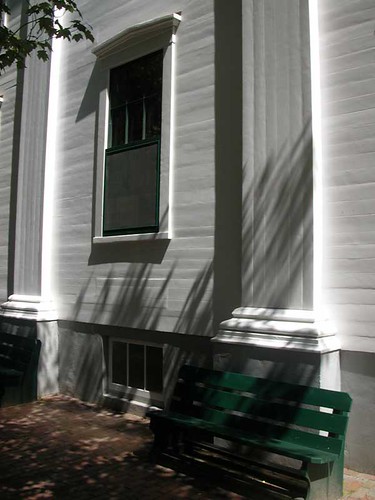 C) The library was closed at the time, or else I’d have gone ahead in to finish my surfing.

D) The signal was open. I did not use super-h4x0r powers to defeat any form of encryption, protection, or enclosure. If there’s a law against defeating security features, I would understand that. I might not support such a law, depending on how it was written; such a law sounds to me like ill-advised defensive anti-geek legislation, but I would absolutely understand the notion of a law saying that I ought not be permitted to circumvent the library’s security measures if they wanted to prevent me from using their wireless. 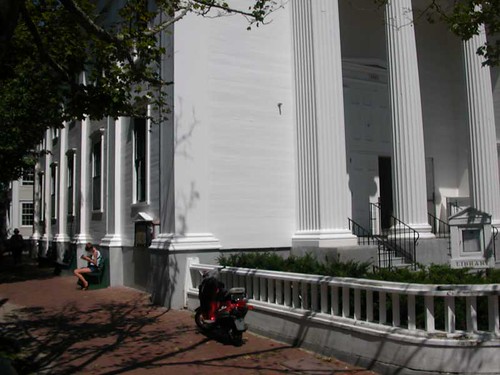 Might this be an obscure, malignant side effect of the DMCA’s anti-circumvention stipulations? Even though I wasn’t circumventing anything?

Three signals in my limited range (TiBooks have notoriously poor reception) had entirely open signals. One was the library’s. Moreover, the library staff evidently knew how to protect a signal, because they manage an encrypted, protected access point, too.

I didn’t hack. I opened my tiBook, and three happy lines appeared, Mail.app started checking my mail, and NetNewsWire posted my entries.

E) This is not a cause for which I’m ready to be a martyr. I’ve got one of those, but this isn’t it.

F) This is what bothers me the most, I think. The officer in question requested — with a grim law-enforcement professional’s demeanor — that I not use my laptop in the vicinity of the library, since that opened the possibility that I might be connecting surreptitiously.

So although it’s legal to use a wifi-capable computer within 100 feet of an 802.11b access point (further for an 802.11g AP), the police feel free to discourage using a computer lest it might pick up an illicit packet. If you’re going to take that approach to alw enforcement, though, wouldn’t it be fairer and friendlier to put up “No Laptop Zone” signs? There might be other open wireless signals around town; am I not allowed to operate my laptop in range of any of them? Isn’t this a rather overblown, silly way of effecting the stated goal of protecting access-point owners from unwelcome intrusion and unjust liability?

G) My mom (a local year-rounder) thinks this all may be because John Kerry visits the island (Not an anti-Kerry sentiment, just an observation of the way the Secret Service population fluctuates).