My mom gave me a copy of a local promotional magazine last night at dinner (with Holly, my sister, and Jennifer, who came over for a couple of days with Pip and me before her Ph.D. program begins — with Margaret’s Ph.D. studies at Duke, Jennifer’s at Union Seminary/NY, and Nate’s plans for advanced study in music, we’re a one-family faculty meeting, or unemployment line, depending on how dire the hiring situation is a few years from now).
Anyway, featured on the cover of N magazine (I can’t find reference to a web site for the print edition, though it gives a URI for its society pages — I don’t know any of the beautiful people I see there), nestled in with stories about why Bush should be re-elected to protect small businesses, on local painters, and on what Livingston Taylor is up to these days, is a story on — wardriving (without using that word). “Wi-fi Hotspots,” the cover announces, and the story narrates the author’s experience of wardriving the eastern end of the island and finding a hundred or so open APs, some of which he names. 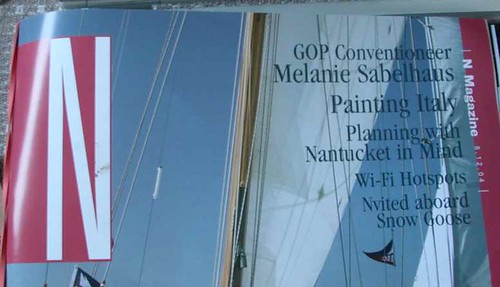 The author — whom I will not name here, since he’s in grave danger of being identified not only as a felon himself, but as contributing to a crime wave of felonious Net surfing, observes,

In all, we discovered over 100 wireless access points. . . . We checked about half of them, and over 20 were open and accessible. I’ve included several secret hotspots in the sidebar. But not all of them. If I list all of my favorite wireless access points, the owners of those hotspots will get wise and shut them down. And then where will I be?

So, as I recapitulate the last two days’ events, I’ve been instructed by a uniformed police officer not to use my laptop at all within wireless range of the public library of which I am a card-holding member, at the same time an ultra-glossy tourist magazine promotes leeching the signals from private citizens and only mentions the library’s access point at the very bottom of the sidebar accompanying the article.

(I’ll leave out any questions about editors who let this writer get away with the sentence fragment in the middle of the paragraph, and the notion of printing the location of a “secret hotspot” in 18-point display type in a featured sidebar.)

At the same time, the article begins with a boldface caution: “Although some wi-fi networks are intended for public use, whether freely or with varying fees, unauthorized access to private networks [which is what the article to follow specifrically narrates] might be considered criminal theft akin to stealing signals from cable television connections [that comparison seems to be doing a lot of work in this discourse]. . . .”

So the magazine says, in effect, “Don’t do this — here’s how to do it, and where, and it’s fun and cool.” I feel like that turtle in the old cartoons, who stumbles into some mire of folly, and beseeches his magico-scientific wizard mentor to save him: “Help me, Prof. Lessig!”