Margaret “Hot Zone” Adam called my attention to this story from CNN about reasearchers who try to learn about the present impending bird flu pandemic by re-engineering the flu strain that killed millions in 1918, and asked, “Do you think the novel has a movie contract yet?”

With a headline such as “Researchers reconstruct 1918 virus” or a photo caption such as “Workers take a blood sample from a chicken at an Indonesian farm where 156 chickens died” — that alone is a movie-worth of plot premise. Margaret wonders whether it’s hard to find actor-chickens, but I suggested that Jeanne and Gail could supply the cast.

Pippa, then, would get to portray the little girl who becomes a tragic first victim — who has a chicken as a pet (she loves her aunts’ chickens)! 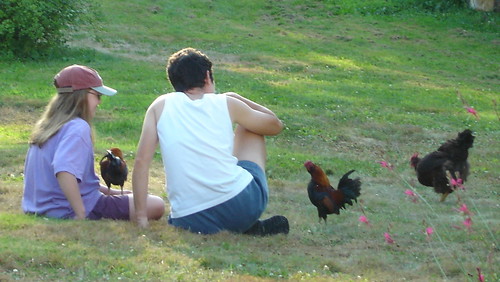 I feel sad just thinking about it; at least, I will till the first royalty check from Hollywood rolls in. Spielberg, you know where to find us.