I woke up promptly yesterday morning, to head to church for Morning Prayer, whence Kelvin gave me a lift to the Solas Festival, where he and I were both on the day’s program. My talk was earlier, providentially scheduled against one by Richard Holloway, former Bishop of Edinburgh, Primus of the Scottish Episcopal Church, and well-known theological radical. I say “providentially,” since (after all) the hand of Providence must be at work in it some way, though what the eternal decree seemed to have in mind was “only a handful of people selecting AKMA’s talk rather than the famous rebel’s more bracing, controversial presentation.” 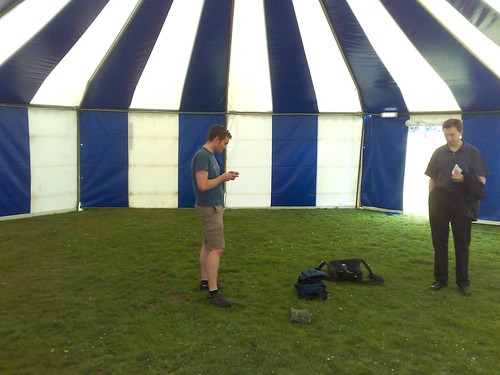 There were more than two people there once I started talking (“three” is actually 50% more than two — and the tent filled up with as many as seven people for short intervals. Of course, when these unwary passers-by discerned the decree of Providence, or perhaps just realised that this was the weedy theologian from Glasgow rather than the hot former Bishop of Edinburgh, they moved along.).

On a more serious note, I talked through my thoughts about an appreciative theological criticism of rock music, along the lines of waht I said at the SBL meeting in November. After I was through, Neal, Doug, Geoffrey Stevenson, and the gentleman from Third Way had good questions for me, and we talked things over for a while. I recognised that I had the essence of an article, and there’s no real reason not to take it the last few steps and find a place to get it into circulation. So that was good.

I took a coffee break and listened to Sol, the band of Rory Butler (who was in one of my fall semester classes). After Sol’s set finished, I wandered back to check in at Kelvin’s movie showing and presentation. That being done, we returned to Glasgow in time for me to watch Ghana trounce the USA in the World Cup.

Then this morning, I preached at the Cathedral. As usual, I stopped at the Bay Tree where I took a few minutes to work on a lectionary essay; then on to the cathedral, where the sermon went well. After church, I arrived back at the flat with time for a sandwich, a nap, and the very disappointing England vs Germany match. All this made for a weekend that was satisfyingly productive without being exhausting. And tomorrow’s Monday!