As I said yesterday, I participated in some recreational cricket in the Close between Sunday Dinner and my afternoon’s marking and awaiting the arrival of my best beloved. Some will no doubt have scoffed at this news, as the only other time I’ve attempted to play cricket — decades ago, at the Duke Graduate Religion picnic — I was utterly confounded by the rules (this matter of not bending one’s elbow when one bowls is incomprehensible to a baseball player). Naetheless, facts is facts, and I hereby offer photographic evidence (generously provided by a friend of St Stephen’s House).

This depicts Greek scholar David D’Silva snickering at the leg-break pitch he intends to unleash at his cruel tutor. One can also see and appreciate the glories of Moberley Close, the medieval (or at least 1970s-ish) stately home of families and flatmates who study at St Stephen’s House. A careful eye will notice the throngs of admiring cricket supporters who have packed the balconies for this epic match of decrepit old novice immigrant batsman against muscular, youthful, experienced bowler. 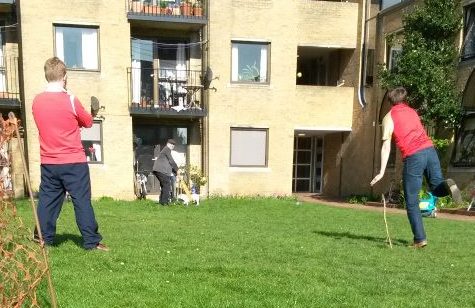 Here the drama begins! David has released the ball and it hurtles toward the wicket, which is being visibly guarded by Patch, Father Damians’s superannuated Jack Russell terrier. Although I am not a dog enthusiast as my brilliant wife is, I would not knock Patch for six (as it appears from this photo that I’m about to do); we OAPs have to stick together. Solidarity, Patch! 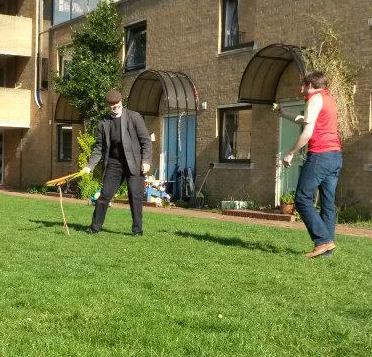 My well-timed strike defied our photographer’s shutter, so sudden and forceful it was, but here we can see me about to touch the crease, as David looks on in dismay. Tharsei, young man; your day will come. I retired without having been dismissed, before the unaccustomed sun burned my unprepared skin. Next, football.