One last point that helps make my transition away from the literal/metaphorical distinction to the continuous interweaving of particular expressions in divers expressive modes: Even the most apparently nakedly verbal expressions entail inflections of appearance, tone, style that destabilise the question of whether they are “literal” (or even what “literal” means in such situations). To deploy an example I’ve used in other contexts, the same text represented differently must be allowed to mean differently: 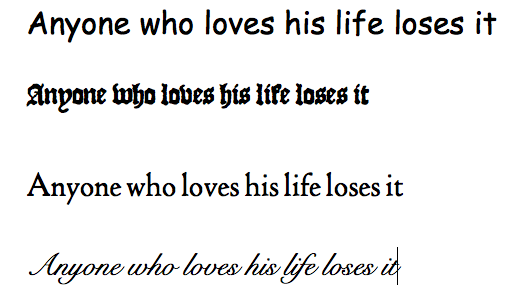 Likewise, imagine the words “Yeah, sure, Mom!” spoken by an eager-to-please eight-year-old child and the same words spoken by a sullen teenager. A focus solely on the words of an expression can never attain the goal of a definitive account of what it means, no matter how determined and expert the researcher. Even if a researcher had access to the original verbal expression — and the idea of “original” in this context is itself intensely problematic — that researcher could never determine just what Snell Roundhand or Comic Sans “means,” what the aural notes of the spoken filial response “mean.”

When discussing and evaluating interpretations, the terminology of “correct” and “incorrect,” “really means” or “doesn’t mean” or “can’t mean” or “has to be understood as” or any of these arm-twisting expressions betrays a category mistake about the activity and goal of interpretation. We can always propose better or worse interpretations (and in specific circumstances these can casually but never rigorously be conveyed by “right” or “wrong”), and we can give reasons for our discernments — that’s it. The willed determination to squeeze “right” and “wrong” into the interpretation of verbal texts arises not out of an feature of textuality, but out of the interpreters’ desire to enforce their judgments upon others, to authorise binding inclusions and exclusions, to extract particular judgments from the to and fro of inevitable historical change and install them as idols of the technical cult.