This is the weather they warned me about. It has been rainy, grey, and chilly almost continuously since last Saturday afternoon. Throw in the shortness of the day, and the resulting atmosphere is relatively gloomy. 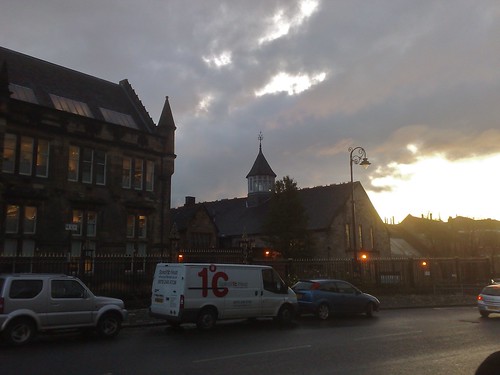 But if this is how Glasgow gets its exquisitely rich greenery, and if the short winter days mean short summer nights, and it took two months of my residence to get a week-long string of cold, rainy days — that’s not bad. The rain’s supposed to dry up over the weekend, and a few days with no precipitation will be a good thing. The fallen leaves are dissolving slowly into a slippery cellulose goo that I’ll be pleased to be rid of. But I like Glasgow, and this weather is part of the deal. (Also, I should remember to goose up the heat in the flat, but not till I get back from my Saturday morning cup of coffee.)

I’m getting used to traffic on the left. When I arrived, my reflexes made me look for traffic on the US sides of the street, even when I knew that the traffic would be coming the other direction. My operating premise was, “There’s a car headed toward me, but I don’t know where it’s coming from.” I must have been a spectacle — even more than usual — flicking my head one direction, then the other. After a while, I’d get to the street, stop and think, look in the UK directions, take a quick look around to make sure there wasn’t a vehicle coming from an unexpected direction, and then cross. Now I’m pretty good at just looking in the needful directions.

I’d be pleased to find a restaurant that served a varied menu of vegetarian-friendly fare (in other words, maybe a gluten-free entree or two). The prominence of meat (and carbs) in Scotland’s diet impresses me.

No glitches in my bank account for the past few weeks. I realize that that shouldn’t be a big deal, but after the headaches getting it started, I’m not taking this for granted.

Oh, and speaking of things getting sorted, my landlord came by last week and saw to the joiner’s putting a new lock on the door. To my utter delight, the lock and key work very smoothly together, so I can walk up, unlock the door, and proceed directly into my flat, instead of arriving at my door and spending an awkward minute or so trying to negotiate with the older lock over whether I deserved to be admitted. Opening a door is not usually counted a particular delight, but I’ve felt a small surge of satisfaction each time I walked up to the door and simply opened it.
Hmm, maybe I’ll add to this list if I think of more updates, but it’s getting late for me to head to Byres Road for coffee.