Our dear friend Gary Turner used to be famous online for his manic comic inventiveness, which he sometimes expressed in new-media stunts such as posting messages left on his phone-answering machine, colourful interviews, Blogtank organising, and photoshopped pictures of his cronies in various situations with television caption crawl incorporated into the picture. I was looking for one of these earlier, and I’m posting them all now so that they’ll be easier for me (and the internet) to find.

From “OK, No More Now, This Time I Mean It” (that is, it would be there if the Wayback Machine had saved the image file): 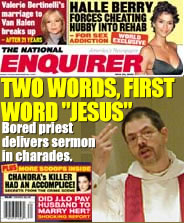 From “I Got AKMA His Gig on Fox News” (note fountain pens in chest pocket: 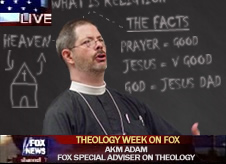 And last of all, coverage of the notorious “Information Highwayman” incident: 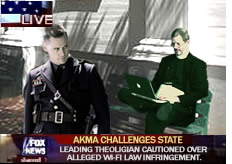 Those were the days….